The autumn season is short-lived in Spearfish as we had our first snowstorm on Oct. 10th.  However, we will always insist on celebrating pumpkin spice and everything nice. By the following Sunday, the weather had reached a whopping 50 degrees Fahrenheit and the City of Spearfish bloomed as we participated in choosing pumpkins and the trudge through the corn maze. Just north of the city on Chicken Creek Road, Spearfish hosts their 7th annual Corn Maze and Pumpkin Patch 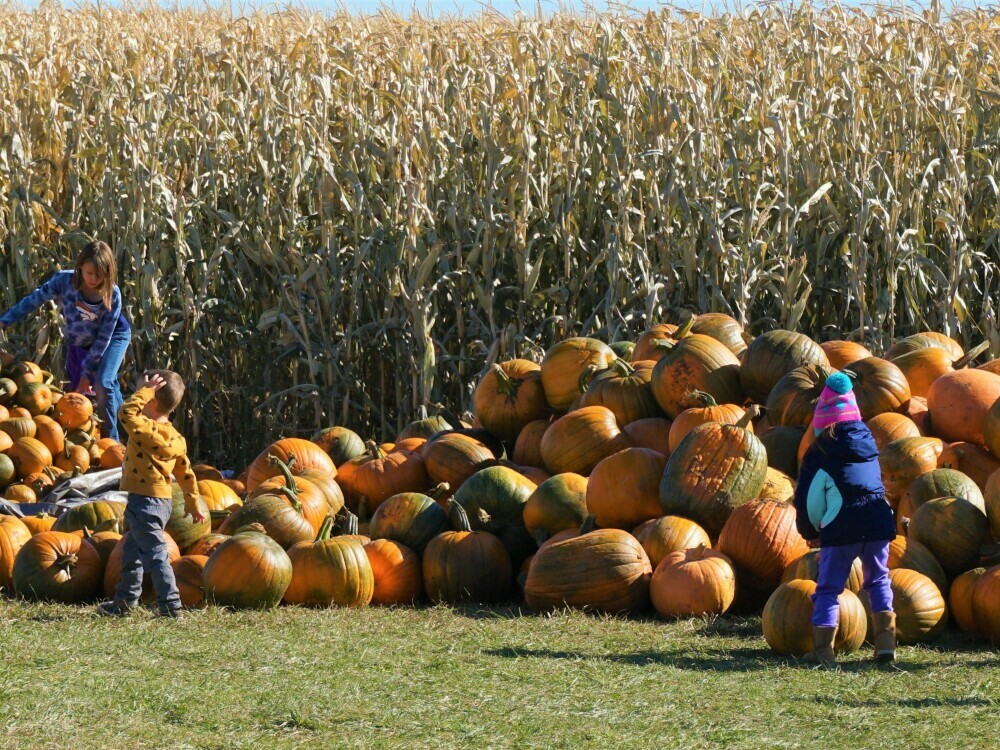 When making the trip to the festivities, we recommend not using GPS because it will take you to the wrong place. Use these directions instead:

When you arrive, you are greeted with friendly faces that guide you through the required steps before entering. On their website, they provide the liability release that you can print and sign prior to arriving, so it makes the process faster. Once the paperwork is done there is an admission fee: 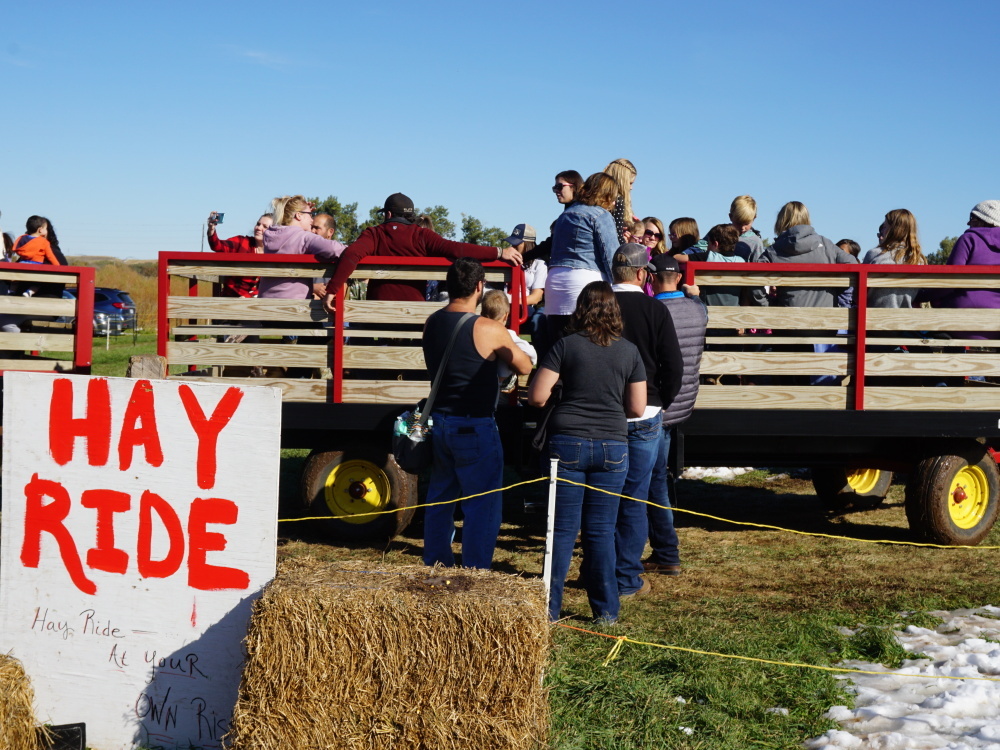 Upon entering the array of all thing’s pumpkins, you are undoubtedly pulled in with an abundant number of activities to enjoy. The very first thing that caught my attention was the hayride. The tractor pulls several carts behind it and makes the trip around the entire perimeter of the pumpkin patch and corn maze. On this specific Sunday, the sun was shining, the air was a calming crisp which made for a peaceful ride that exhibited the perfect autumn mood.

Right next to the Hayride, there was a mound of pumpkins in all shapes and sizes for anyone to choose from. While the pumpkin pickers were choosing the pumpkin that spoke most to them, pick-up loads would continuously drop off even more small orange fruits making it an endless choice for the children to pick just the right soon to be jack-o-lantern. 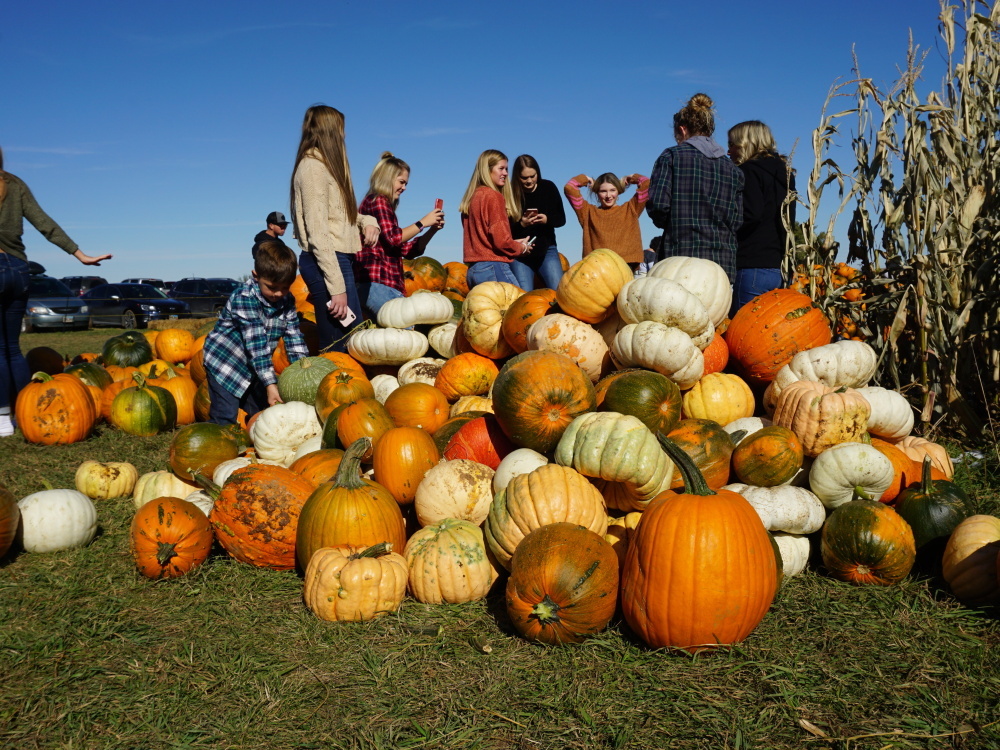 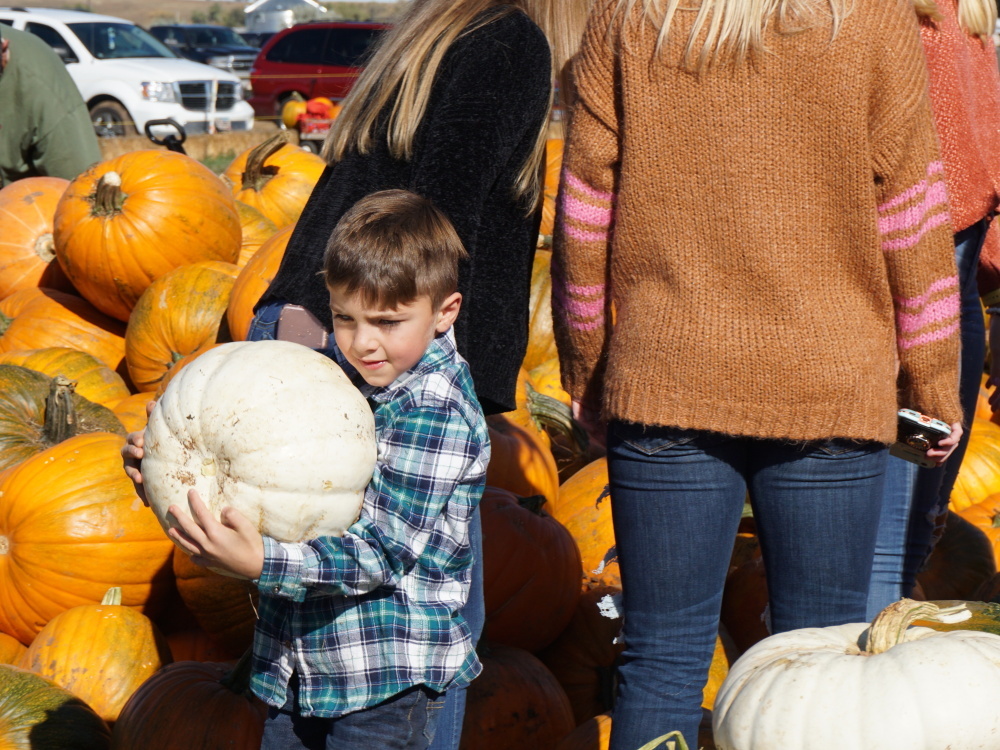 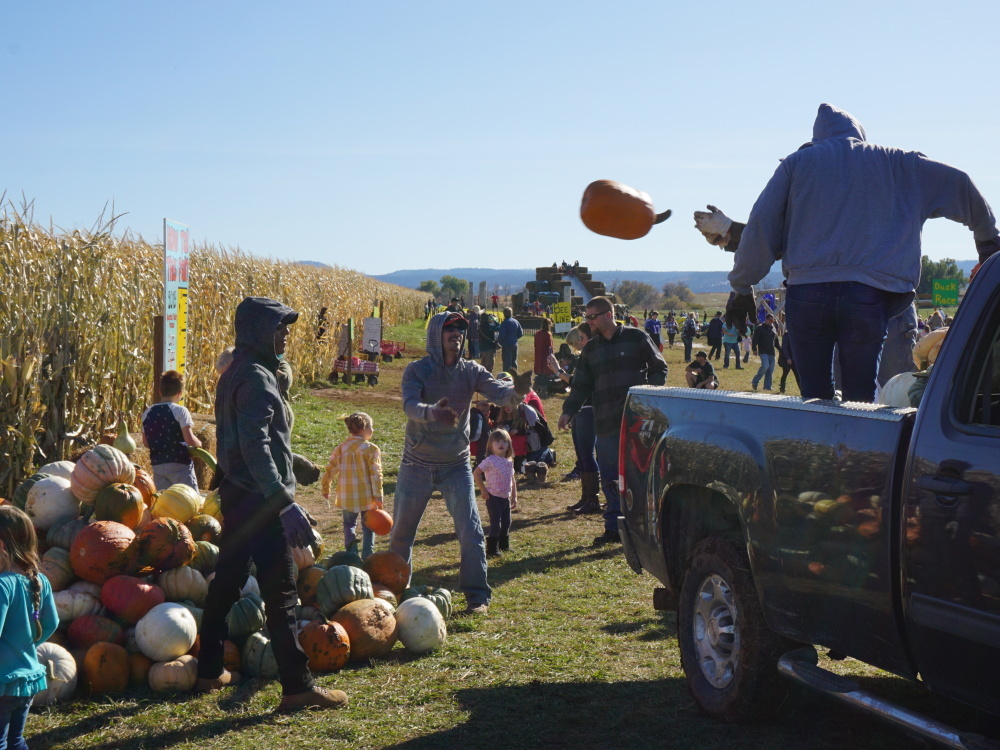 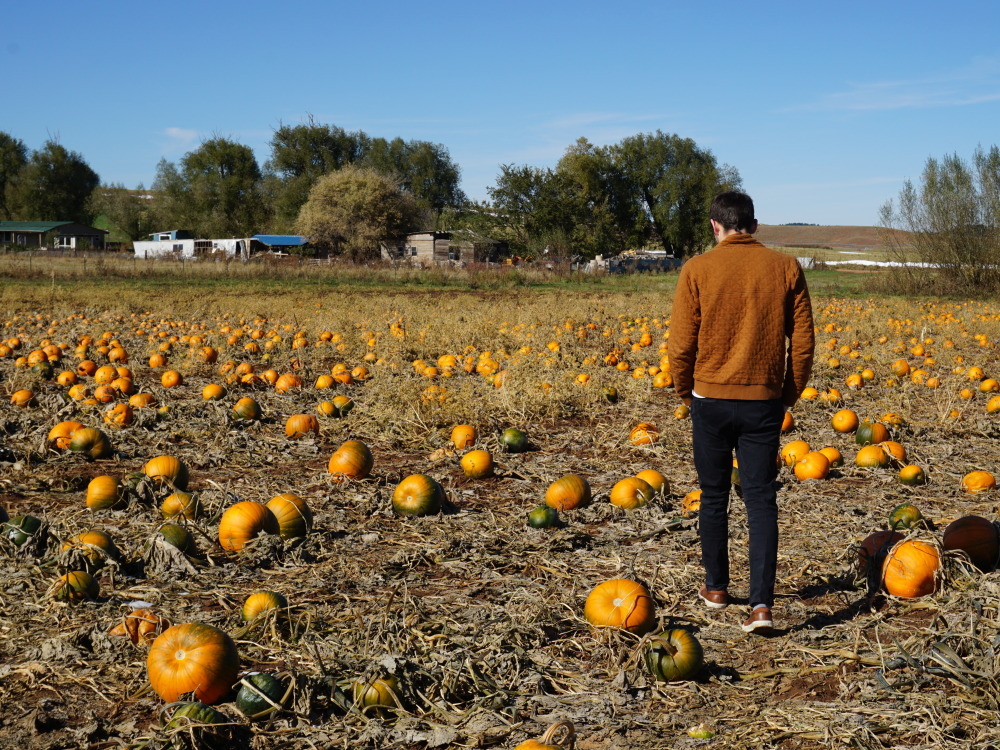 The corn maze hides behind the mounds of pumpkins, for anyone to solve. The melting of the snow made the maze a little muddy, but it did not stop the force of children and their desire to celebrate the Halloween themed labyrinth. 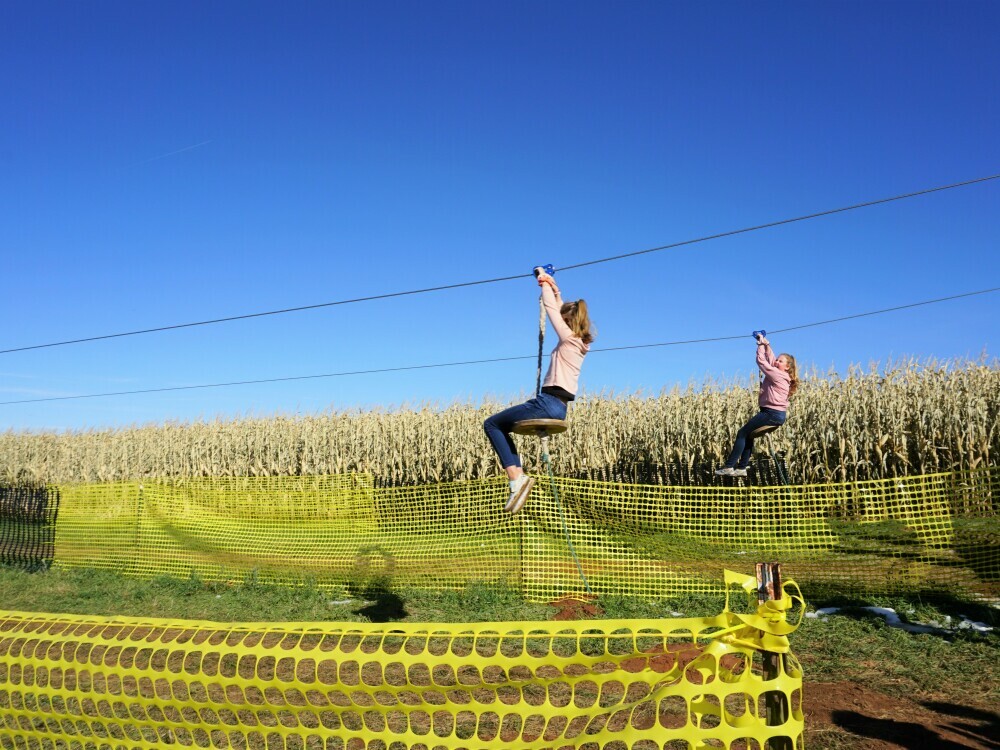 Continuing forward, a bright yellow net sections off the “Bee Line.” Hay bales stacked on top of each other leads the way to jump onto a small round swing that sends you flying about 70 feet to the opposite side. Thank goodness waivers were signed. In all actuality, the “Bee Line” zip line station is a hit with the kids. They get off the swing with a pure smile that screams genuine happiness. 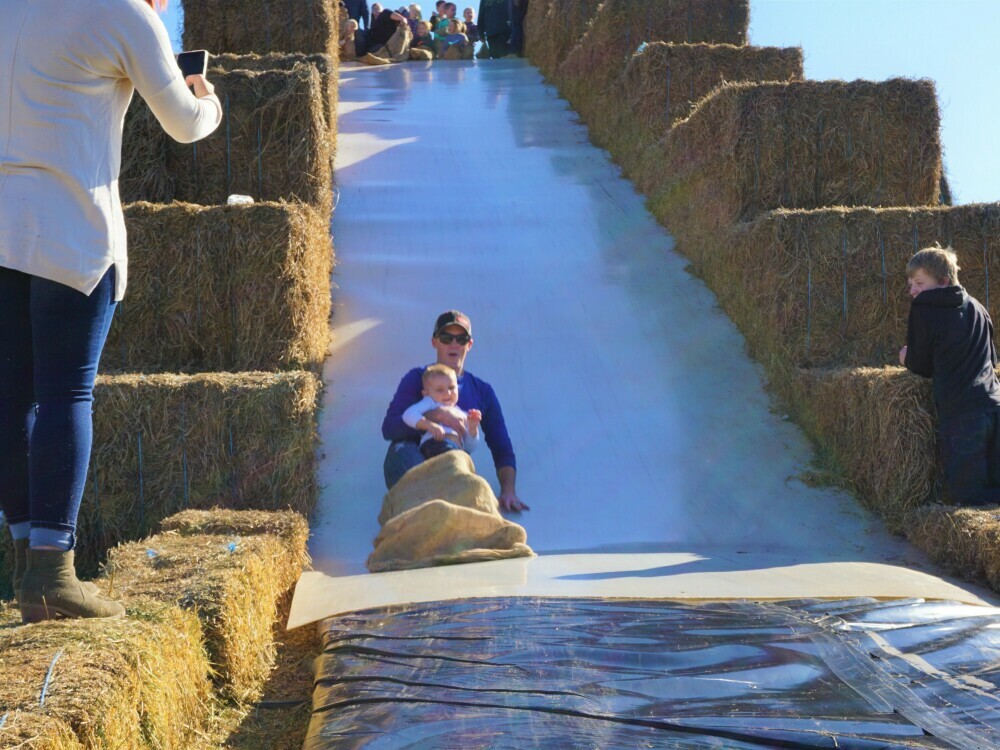 Following the “Bee Line” was the hay slide. This particular activity is appealing to all ages. I would see dads go down the slide multiple times. Some would say they were doing it for their kids but—we all know the truth. This pumpkin patch brings out the kids in all of us! 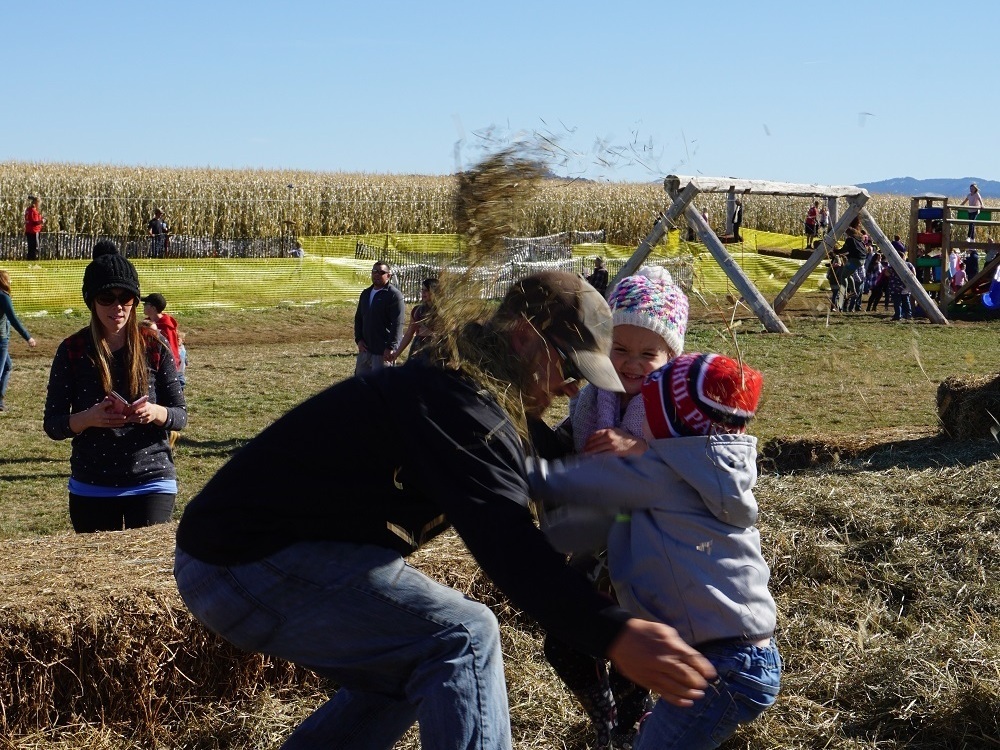 Bringing it back around, I came across the Hay Jump. And if you are wondering what that consists of, well you jump into hay, loose hay. The kids love it. They will stand on top of the hay bales that surround the pool of loose hay and jump right in and if you think it is just the kids that do this, you would be mistaken. I saw at least two dads throw each other into the hay in the five minutes I was there. It was pretty great though, thank you dads for making my day and making everyone laugh. This just goes to show that we are allowed to let our inner child shine every now and then!

The Rest of the Fun

In the middle of the vicinity, there was a tire climb, a duck race, bale pets, corn box, and playground activities. The Spearfish Corn Maze and Pumpkin Patch does not disappoint so make sure you get a chance to visit it! 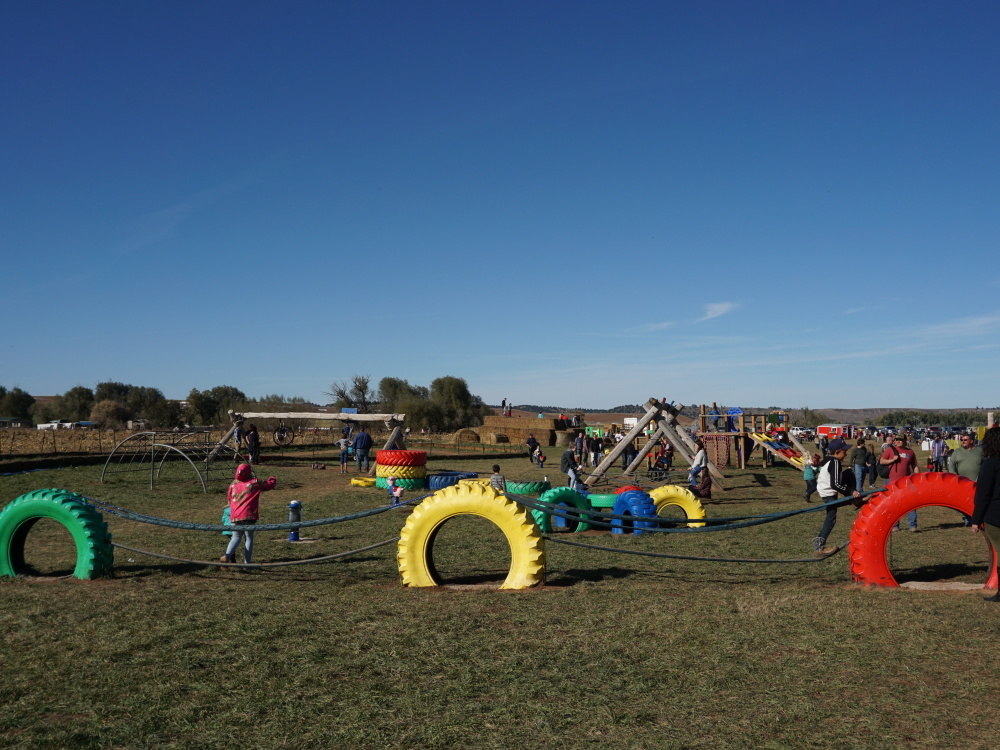 The last two weekends of October, the corn maze will turn into a haunted corn maze between the hours of 7 p.m. - 9 p.m. So, if you are easily inspired by the Halloween Spirit, the Scare Maze is a must! For more information visit their website here!