The Great 8 of Spearfish

People have flocked to Spearfish for hundreds of years, adding a rich cultural context to the phenomenal landscape. Each traveler comes for something different.  Some long to get lost on a winding trail, between whispering pines and a rushing creek, or to reach a summit at sunrise. Others yearn to hear stories of the Old West; of Native American legends, settler’s tales, and hopeful gold miners.  To see rusty relics and read crumbling old letters.

Taking into consideration all Spearfish has to offer, we’ve put together a list of Spearfish’s top attractions -- the "Great 8." 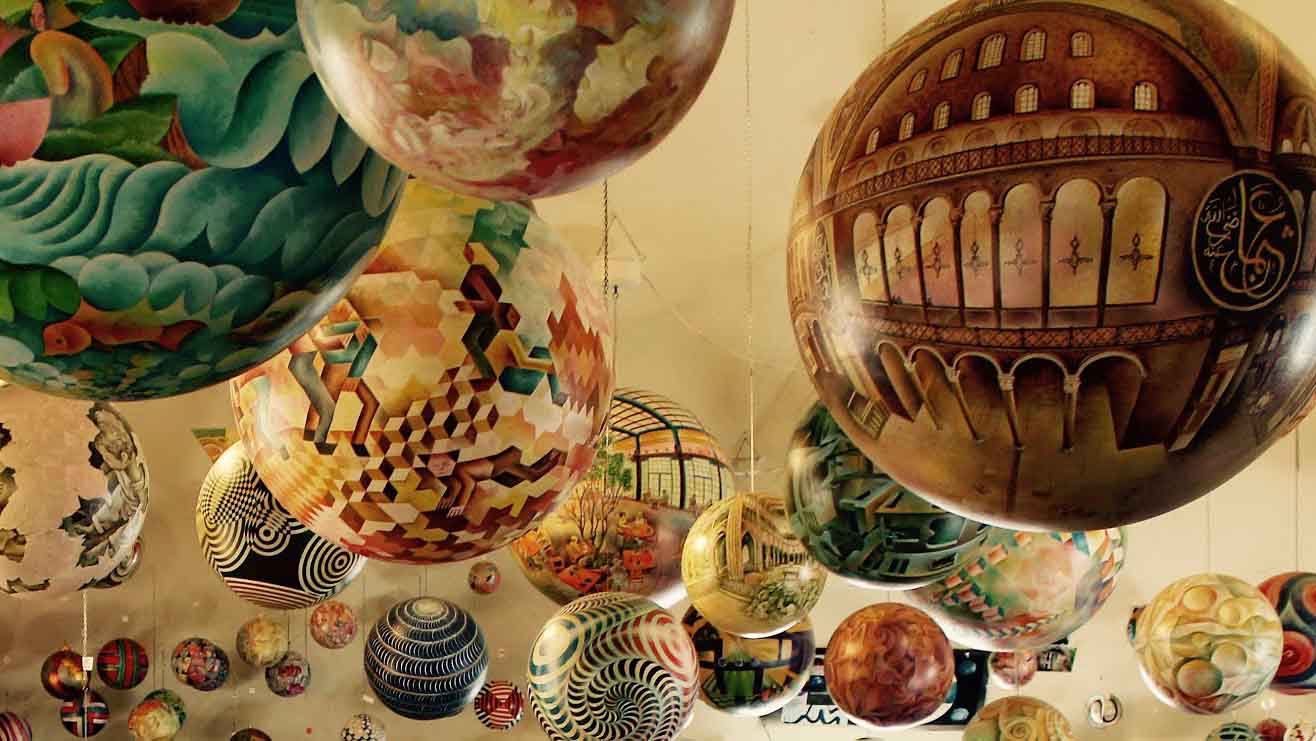 Unique perspective, dreamy figures, and a 4D structure. The world-renowned Termespheres are painted by Spearfish’s own Dick Termes.  He uses six-point perspective to paint an entire world (left, right, up, down) on a sphere. The sphere is then suspended and attached to a small, quiet motor.  Once these elements of space and time are added, the 4th dimension is in place. Wonders of art, these immersive pieces have been sold from San Francisco to Japan.

However, the only Termesphere Gallery is right here in Spearfish. It is free to visit 9-5 seven days a week all summer long. During winters you can visit Saturday and Sunday 10-5, and weekdays by chance or appointment. The gallery itself pays tribute to these well-known works through its spherical structure. Aside from the gallery, the spheres appear in various businesses around town--including the Spearfish Visitor's Center by the clock tower downtown. Vital to the local art scene, the Termesphere Gallery and the work of Dick Termes are truly local works of originality. 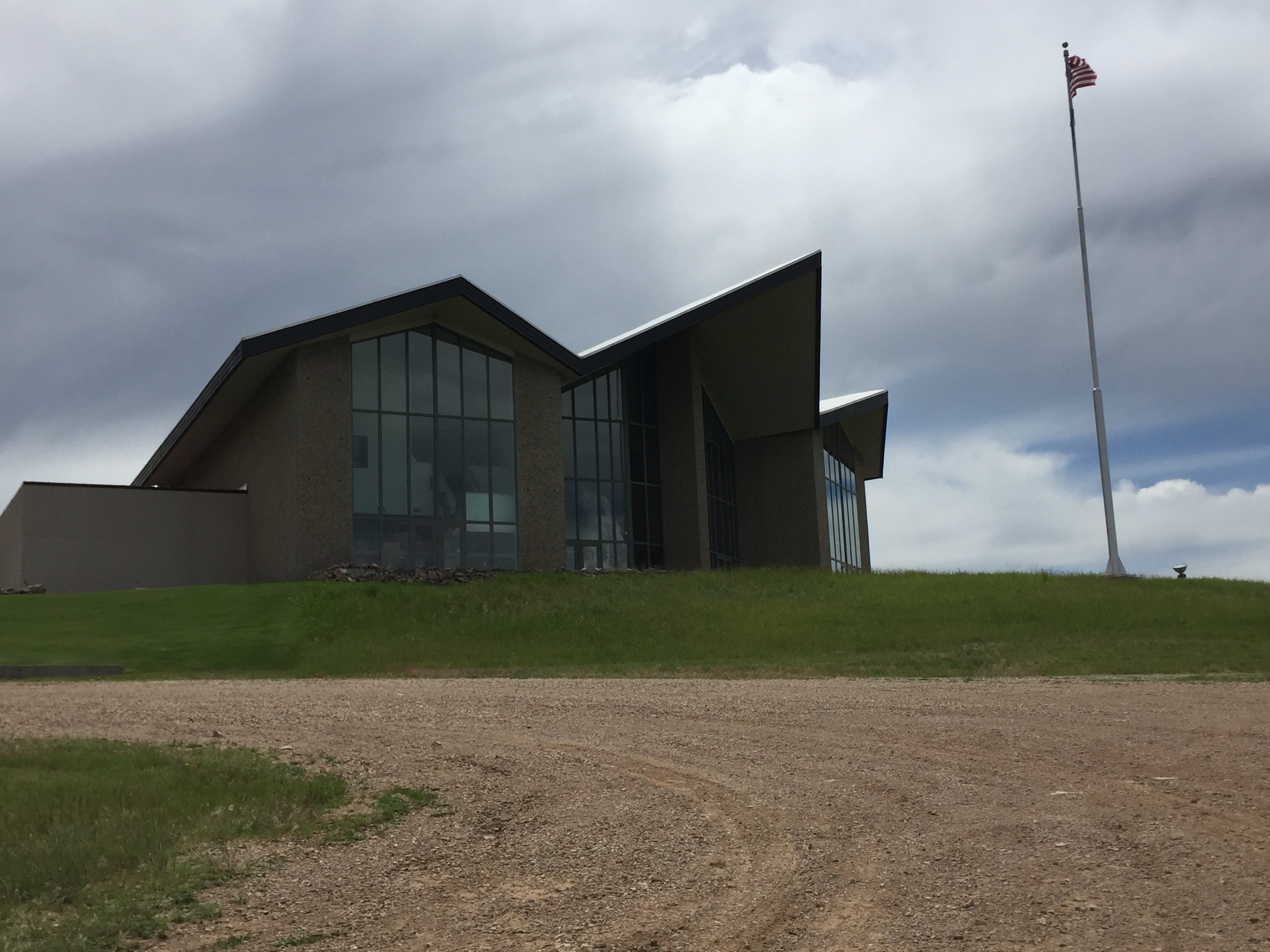 The High Plains Western Heritage Center encompasses the history of five Western States (South and North Dakota, Montana, Wyoming, Nebraska) and tells the stories of pioneering, cattle and sheep ranching, rodeo, Native Americans, transportation (railroad, covered wagon) and mining.
It even hosts a herd of longhorn steer, which are pastured on 40 acres with a panoramic view of Spearfish.  Many genuine old dusty Western artifacts, sculptures, and Native art are also featured.

The Western Heritage Center provides locals and visitors alike a means to learn the context the 5 state area was created from.  Ideal for history buffs and children alike, the Heritage Center is an interesting collection and phenomenal display of pioneer life.
Take advantage of this opportunity by visiting the High Plains Western Heritage Center between 9-5 daily.  They are located on Heritage Drive off Exit 14 and are modestly priced ($10 for adults.  Ask for a guided tour to get the full experience. 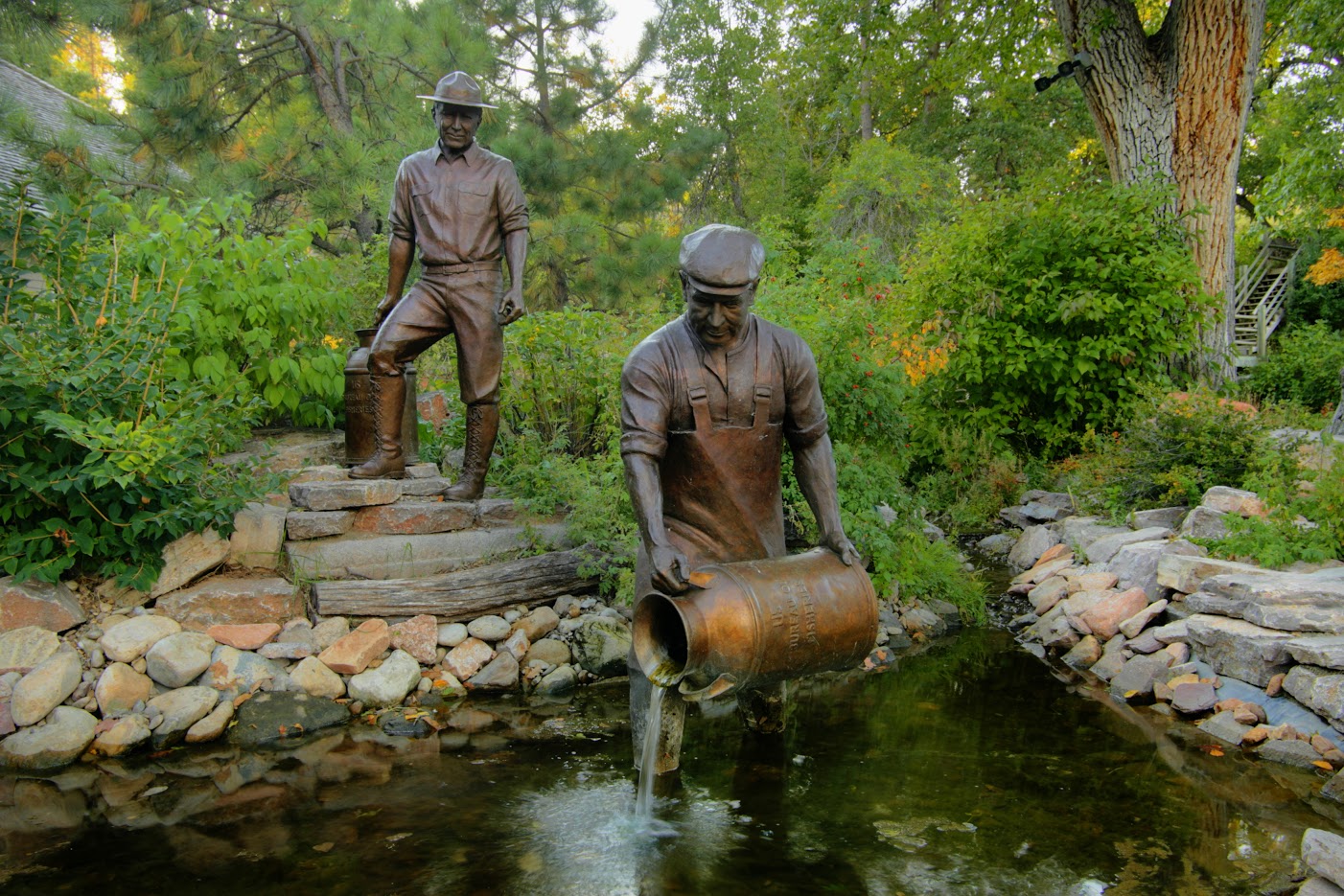 A plethora of ponds, seasonal waterfalls, rock walls, and more make the DC Booth Fish Hatchery an all time favorite. When it opened back in 1896 though, the hatchery was strictly business.  The first ten years, trout eggs were hauled by covered wagon from Yellowstone to Spearfish.  Later on they were transported by a wooden river boat (The Yellowstone Boat) and then railcar--both of which can still be viewed at the hatchery.

Though the ponds, archives, and more are now open to visitors, the 117 year-old DC Booth Historical National Fish Hatchery still provides 20,000-30,000 trout to local streams and lakes.  Highlights of the hatchery include:

DC Booth Fish Hatchery is a go-to spot for taking a tranquil walk, letting your dog stretch its legs, or feeding the fish. The hatchery is open year round dawn until dusk, but tours are only done in the summer. 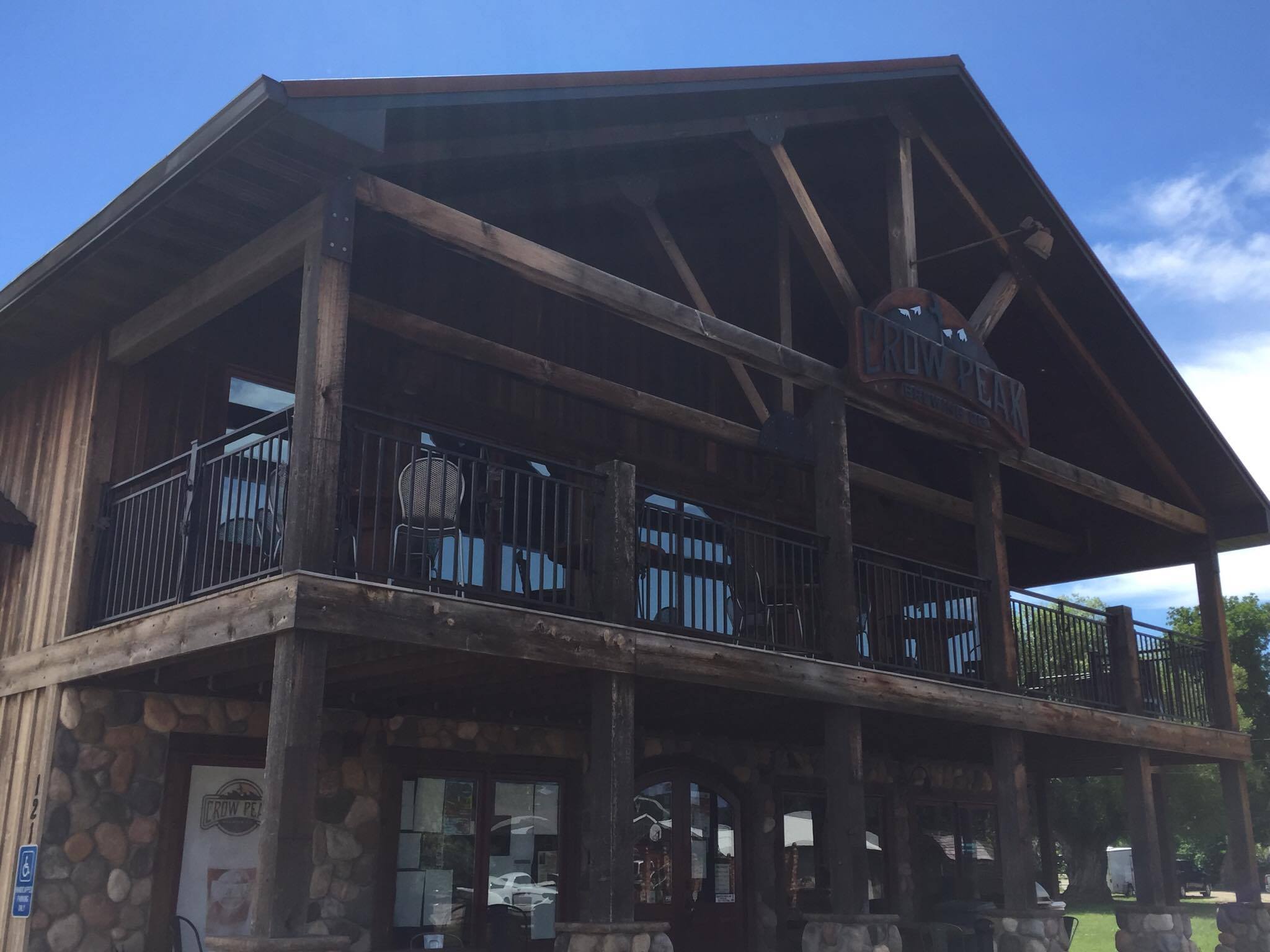 Since its establishment in 2007, Crow Peak Brewery has become a community staple.  Known primarily for their Pile o’ Dirt Porter and Canyon Cream Ale, the brewery expanded quickly and needed a new building by 2009. This new brewery and tap room have a homey, woodsy feel.  You can usually catch a pooch snoozing on the patio or balcony--which provide great views of the sunset over Crow Peak and the live music hosted outdoors during the warmer months.

In the colder months the fire place inside is on, and a comfy couch awaits in front of it.

During Happy Hour and on weekends, the brewery is at its busiest.
The after-work crowd, families with children, BHSU students, and travelers frequent the brewery, which rotates through exotic treats such as Wicca Chili Ale and their Black Coffee IPA.

#4 The Crowning Peaks of Spearfish

Crow Peak, Lookout Mountain, and Spearfish Mountain.  They dominate the skyline, interrupt the sunset, and fit snugly around Spearfish. When the Spearfish area was first settled in 1876, the pioneers noted this rim of stone and pine; they called it a crown and dubbed Spearfish “Queen City.” Spearfish Mountain has no trail and is wildly untouched by man, but the other two are open for exploration.

Lookout Mountain is a relatively short hike, and the mountain overlooks Spearfish and Wyoming.  It can be accessed two ways; through Sandstone Hills housing development, and via Nevada Street.  Simply park at the end of the road and walk through the tunnel and across the field.
Crow Peak is one of the most popular hikes in the hills, though much more rigorous.  The trail is about 7 miles, and it winds steeply up the rock.  From the 1560 foot summit, you can see Wyoming and Spearfish from the eagle’s view.

Avid outdoorsmen also ride through on horseback, bike the trail in the summer or winter, as well as snowshoe or snowboard the mountain while it is less crowded.
The Crow Peak trail is accessible through FSR 214, 7 miles out of Spearfish.

Lookout, Crow Peak, and Spearfish Mountain have been attractions and icons of Spearfish since the pioneers arrived.  The crown jewels will forever be a symbol of the Northern Hills. 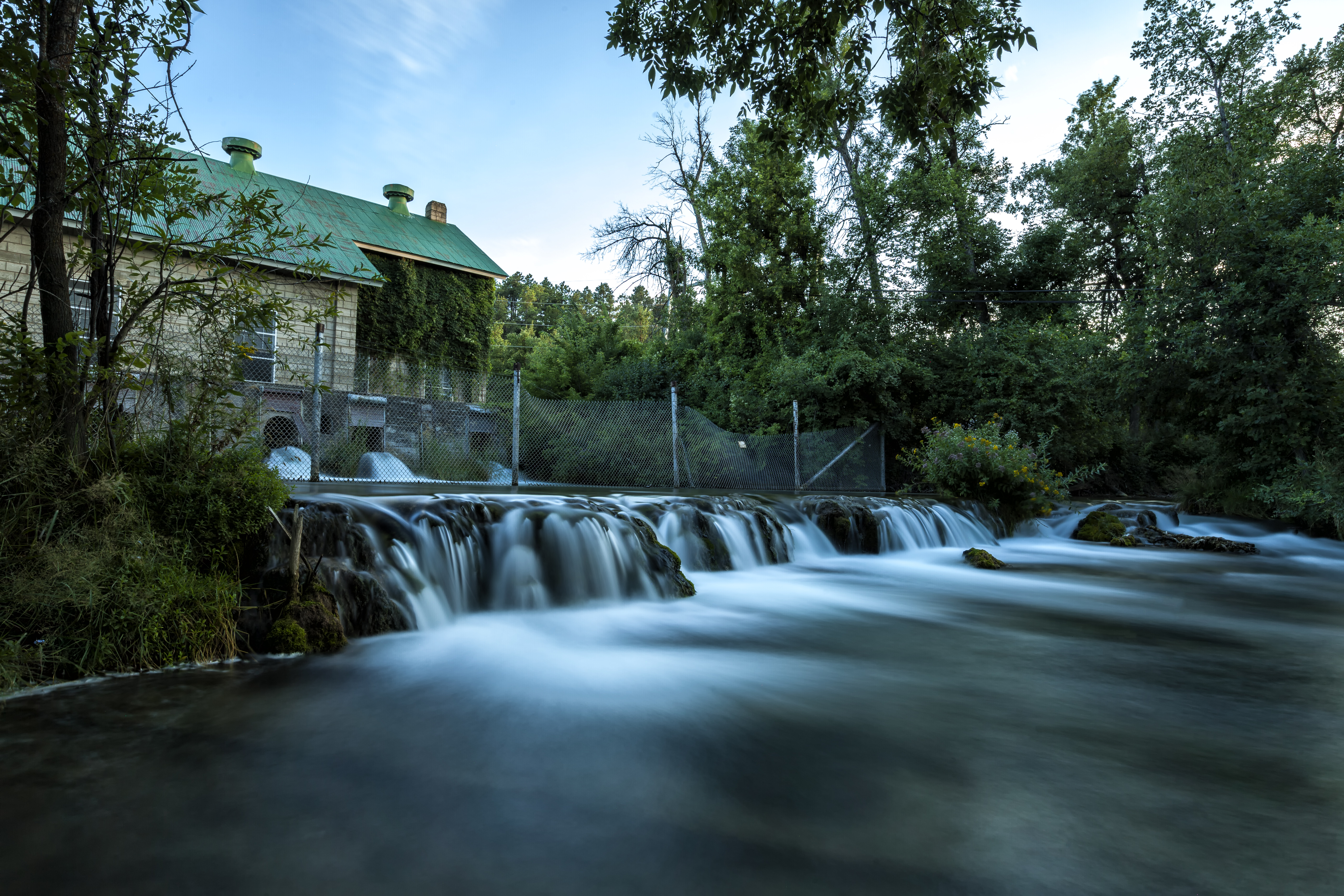 The pristine water of Spearfish Creek winds through the canyon and flows South to North so quickly, it freezes only on the bottom.  Along the way, it stretches through the City Campground and Park, DC Booth Fish Hatchery, Brady Park, and the Meier property by Evans Park.
The brown, rainbow, and brook trout in the creek submit to fly fishermen, who stand hopeful in their waders. Popular fishing spots include:

However, since Spearfish Creek is teeming with trout, any spot down the creek is sure to satisfy.
Sun worshippers can be found tanning by the creek or tubing it all summer long, and there are many secret swimming holes that are deep enough to jump in; some are even equipped with rope swings.

Spearfish Creek powers the community through supporting a hydroelectric plant that is over 100 years old.  The plant was purchased from Homestake Mining Company back in 2004.

Downtown Spearfish packs a punch with dining, shopping, and more.  The shops and galleries escape the confines of Main Street, extending the downtown area to side streets Hudson, Illinois, and Grant.

Many of the downtown buildings are nearly as old as Spearfish itself; some were built out of local Sandstone.  Old Spearfish City Hall is also on the registry; it is now home Leone’s Creamery, West River Studios, and more. The Matthews Opera House and Arts Center--still in use today--first opened its doors over 100 years ago, in 1906. They now host concerts, plays, art shows, and more.

Stop by Visit Spearfish seven days a week from May to September by the clock tower for a historic downtown map, Spearfish Activity Guide, and more!

A narrow highway winds between stone giants, racing next to the creek, nestled in between Ponderosas and Aspens. When it’s cold, the fog presses down and the woods become mysterious.  Not a deer rustles, not a bird flies.  The pines contrast phenomenally against the shimmering snow. In Fall, the crimson leaves of birch and oak are burning up by the millions and the crisp air smells fresh and feels good to breathe.

When it’s warm, the canyon is a comfortable degree or two cooler, and the golden sun bathes the crevices of each and every limestone tower.  Purple and white wild flowers dot the forest floor.  The flooded creek sings lazily, and town seems forever away. Carved millions of years ago by a receding sea eroding soft stone, Spearfish Canyon has long been revered by man. Since Spearfish was settled the canyon has offered world-class hiking, fishing, cross-country skiing, snowshoeing, snowmobiling, rock climbing and of course photo ops.

When it comes to cross-country skiing, the Eagle Cliff trails are a treat.  This set of 21 trails that sprawls through the canyon can be accessed through taking Highway 14A to Cheyenne Crossing, then going southwest on Highway 85.  The first trail head is 7.4 miles in.

With over 350 miles in trails, the Black Hills Snowmobile Trail System is one of the largest in the nation.  The #4 trailhead is in Spearfish Canyon--near Spearfish Canyon Lodge, which will rent you all the snowmobiling equipment you could possibly need.

So--which will you do first?  Gain a new perspective at the Termesphere Gallery?  Go for a swim in the creek?  Or sit back with a brew at Crow Peak Brewery?

Between the diverse culture and natural wonder, it can be hard to pick a favorite.

Which is yours?  Let us know!